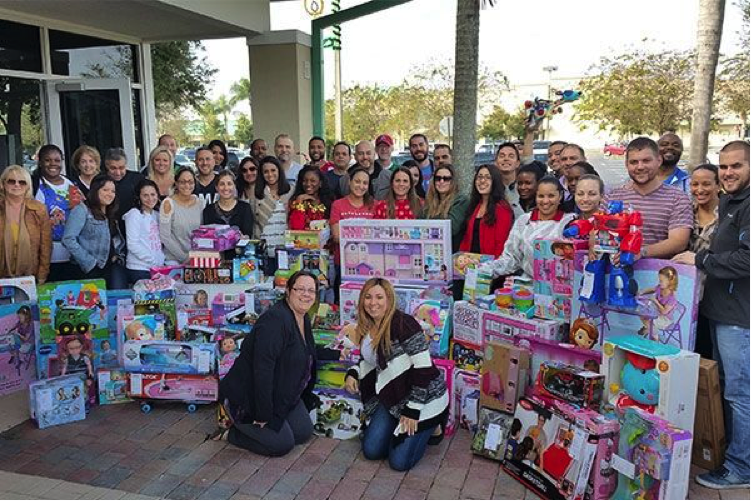 The Salvation Army’s Angel Tree program received 275 gifts this year from Bankers Healthcare Group, a company that provides financial solutions to healthcare professionals. BHG’s offices in Syracuse, New York and Davie, Florida participated in the donation to the Salvation Army location in their respective areas.

Bankers Healthcare Group’s Davie corporate headquarters began the tradition in 2014 by foregoing their annual company gift exchange and instead channeling their efforts into providing for the Angel Tree program. The program provides new clothing or toys for children of families that apply for Christmas assistance from the Salvation Army. The program began in 1979 in Lynchburg, Virginia and has since spread across the country. It has provided thousands of gifts to children each year since its inception.

Spearheading BHG’s involvement were Jennifer Nino and Dawn Hart in 2014. Under their leadership, BHG employees collectively donated 116 unwrapped toys to children in need. "We decided on the Salvation Army Angel Tree because we thought that providing for our community and its children in need was more important than getting each other gifts," Hart said.

The pair were drawn to how personal the Angel Tree program was compared to other charitable endeavors. “The Angel Tree program was a lot more personalized. The angel you pick has the child’s name, age, clothing and shoe size as well as a toy that they asked for. This felt like you really had that child for Christmas and would assure they would have your gift to open that day,” explained Nino.

Nino and Hart are both mothers, and they couldn’t imagine not being able to provide a gift to their own children for Christmas. “It was heartbreaking to think that if we didn’t at least try and convince people to participate, then there would definitely be kids waking up to nothing at all on Christmas morning,” Nino continued.

“The Angel Tree Program is one that is very personal and we are so very grateful to those individuals and businesses who help support their neighbors in such a loving and kind way,” said Major Keath Biggers, Area Commander of The Salvation Army of Broward County. Bob Castro, President of BHG added that he is “excited to see the Angel Tree program grow to become an annual tradition here at BHG.”

Nino shares in Castro’s excitement as she looks ahead to 2016. “We’ve really enjoyed gathering all the gifts these past two years and love seeing how excited the office gets when they show us what they bought. This year was incredible since we were able to provide around 100 more gifts than we did last year; I can’t wait to see how we top it next year.”

For more information about BHG: