Two New York State cities, Oswego and Binghamton, have an additional reasons to celebrate The Salvation Army’s National Donut Day on Friday, June 3. A Salvation Army woman officer assigned to Oswego, New York, who along with another woman, became the first women to travel to France with the First Division of the American Army during World War I. At the same time, a Salvation Army Captain from Binghamton was re-assigned from Binghamton to the New York City headquarters of The Salvation Army and appointed to the personal staff of the Army Commander Evangeline Booth.

Captain William “Pops” Turner was asked to return to Binghamton and use his influence to learn doughnuts making from the Russell-Spaulding Baked Goods Company. There Capt. Turner learned the secrets of their famous doughnuts. At that time, the Binghamton newspaper wrote, “By the time, he gets started …where the shot and shell are falling thickest upon the boys…and there is the gravest need for a tender but strong hand upon them behind the lines, and when a cup of hot coffee and a doughnut is going to taste to best – right there you’ll find Staff –Captain Turner.” 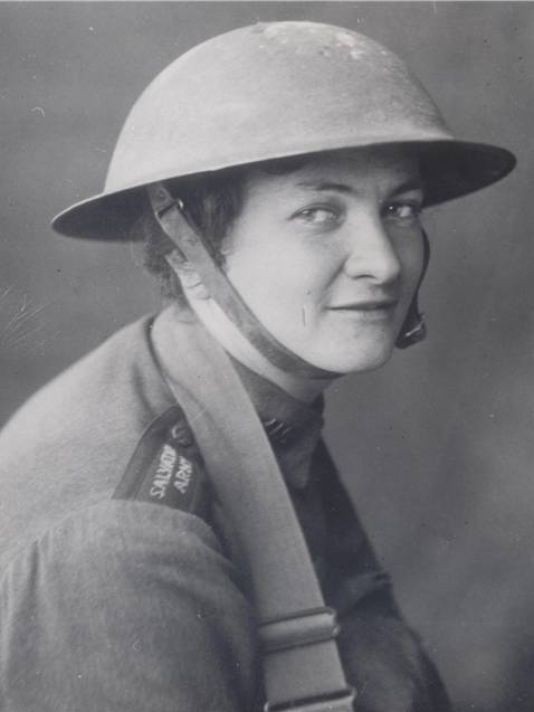 Helen Purviance, fellow officer Ensign Margaret Sheldon, and nearly 250 other lassies delivered kindness to World War I soldiers on the front lines in France by providing writing supplies, stamps, clothes-mending, home-cooked meals, pies and of course, doughnuts, for soldiers on the front lines. While at the front in the midst of bombs and live fire, the donut “lassies” fried donuts for the tired soldiers. Helen recalled, “I was literally on my knees when those first donuts were fried, seven at a time in a small fry pan. There was also a prayer in my heart that somehow this home touch would do more for those who ate the donuts than satisfy a physical hunger.”

In this unedited letter home to her family, Helen tells them what a typical — and grueling — day was like for her and for the other lassies:

“At 8 we commence to serve cocoa and coffee and make pies and doughnuts, cup cakes and fry eggs and make all kinds of eats until it is all you can see. Well can you think of two women cooking in one day 2,500 doughnuts, eight dozen cup cakes, fifty pies, 800 pan cakes and 225 gallons of cocoa, and one other girl serving it. That is a day’s work in my last hut. Then meeting at night, and it lasts for two hours.”

Helen recalled in a newspaper interview in 1976, “I just knew anything could happen. There was machine gun fire and they dropped some bombs from planes. One of them fell in my backyard but somehow or other, you get an inner reserve which comes to your assistance in a time of great stress.” She died in 1984 at the age of 95.

Helen Purviance, a native of Indiana, had been assigned to the Salvation Army in Oswego, New York, which was founded in 1885.  She came to Oswego in 1913 and found the Army still struggling to grow. After the war, she requested to be sent back to Oswego and the rapid growth of the Army in Oswego is a direct result of her work. At first, the Army conducted its meetings outdoors, as General Booth’s philosophy was that you took the fight against evil into the streets and didn’t wait for those who needed help to come inside and look for it.  Eventually, with the growth of the Army, it became obvious that indoor accommodations would be necessary especially during the harsh winters along Lake Ontario.

The first citadel in Oswego was dedicated on August 1, 1920.  It stood on the corner of West 1st and Cayuga Streets All of this was due largely to the work of one woman, Helen Gay Purviance. The Salvation Army started National Donut Day in 1938, during the Great Depression, as a way to raise funds and bring awareness to The Salvation Army’s social service programs and a way to honor the “Donut Lassies."